Chef's Hat is a four-players competitive card game designed to be played by humans and artificial players. Its rules were developed to allow a fast learning curve, but the game mechanics permit the emergence of fo rich strategies to beat your adversaries. The entire game was built with the interaction between humans and agents in mind, and all the game design elements are easily captured by humans and parsed by automatic perception systems. Interaction between the players is the main aspect of the game, and to develop harmonic gameplay scenarios between artificial players and humans is our main goal.

To achieve our goal, we study and propose the development of artificial players that learn how to play the game in a competitive manner against humans. Our end-term goal is to provide a holistic development cycle, introducing novel mechanisms for automatic perception, decision making, competitive strategy development, and an embodied response in terms of action generation. The entire project is focused on modeling, understanding, and modulating the decision making of an artificial agent based on the social interaction between the players and the game state.

This website describes the milestones and outcomes of this project, and important findings and resources.

We are preparing a novel experiment to model rivalry aspects in our artificial players! Read more about in our Pre-registration NeurIPS2020 paper:

If you are interested in knowing more about this experiment and to have a chance on playing the game against Avery, Beck, and Cass, please register below:

Competition in a kitchen is fierce: the Chef always gets benefits. Use your ingredients to make the tastiest pizza of all. The faster you get rid of your ingredients, the higher you rank in the kitchen will be. Be aware though! Don’t get too comfortable being a Chef. If you are not careful you will end up begin a Dishwasher.

For a complete overview of the development of the game, refer to:

This research project is divided into three phases, each of them having its own goals and milestones.

Phase 1 - vs Understanding Myself

In this phase, we focused on the development of the initial infra-structure composed of the game scenarios and a virtual environment, and on the proposal of artificial agents that focus on learning how to be competitive.

In this regard, we published the following research:

Barros, P., Tanevska, A., & Sciutti, A. (2020). Learning from Learners: Adapting Reinforcement Learning Agents to be Competitive in a Card Game. International Conference on Pattern Recognition (ICPR2020).

Barros, P., Wermter, S., & Sciutti, A. (2019). Towards Learning How to Properly Play UNO with the iCub Robot. Workshops on Naturalistic Non-Verbal and Affective Human-Robot Interactions at the IEEE International Joint Conference on Developmental Learning and Epigenetic Robots (ICDL-EPIROB 2020).

Phase 2 - vs Understanding Others

In this phase, the development of the agents reaches the level of understanding the competitors. We focus on modeling the interaction aspects between the players to modulate their behavior, directly, through decision making, or indirectly based on social influence.

In this regard, we published the following research:

Barros, P., Tanevska, A., Yalcin, O., & Sciutti, A. (2020). Incorporating Rivalry in Reinforcement Learning for a Competitive Game. The Pre-Registration Workshop at the Conference on Neural Information Processing Systems (NeurIPS2020).

The last phase of the project involves the implementation and adaptation of the artificial agents developed in the previous phase on a robotic platform.

If you want to have access to the game material, containing all the game elements ready to be printed and played, please contact us.

The entire game, with all the game mechanics, was ported to an OpenAI GYM-based simulation environment that allows us to train and evaluate our artificial agents.

The Moody Framework incorporates an intrinsic affective state to players playing the Chef's Hat game in the simulated environment. 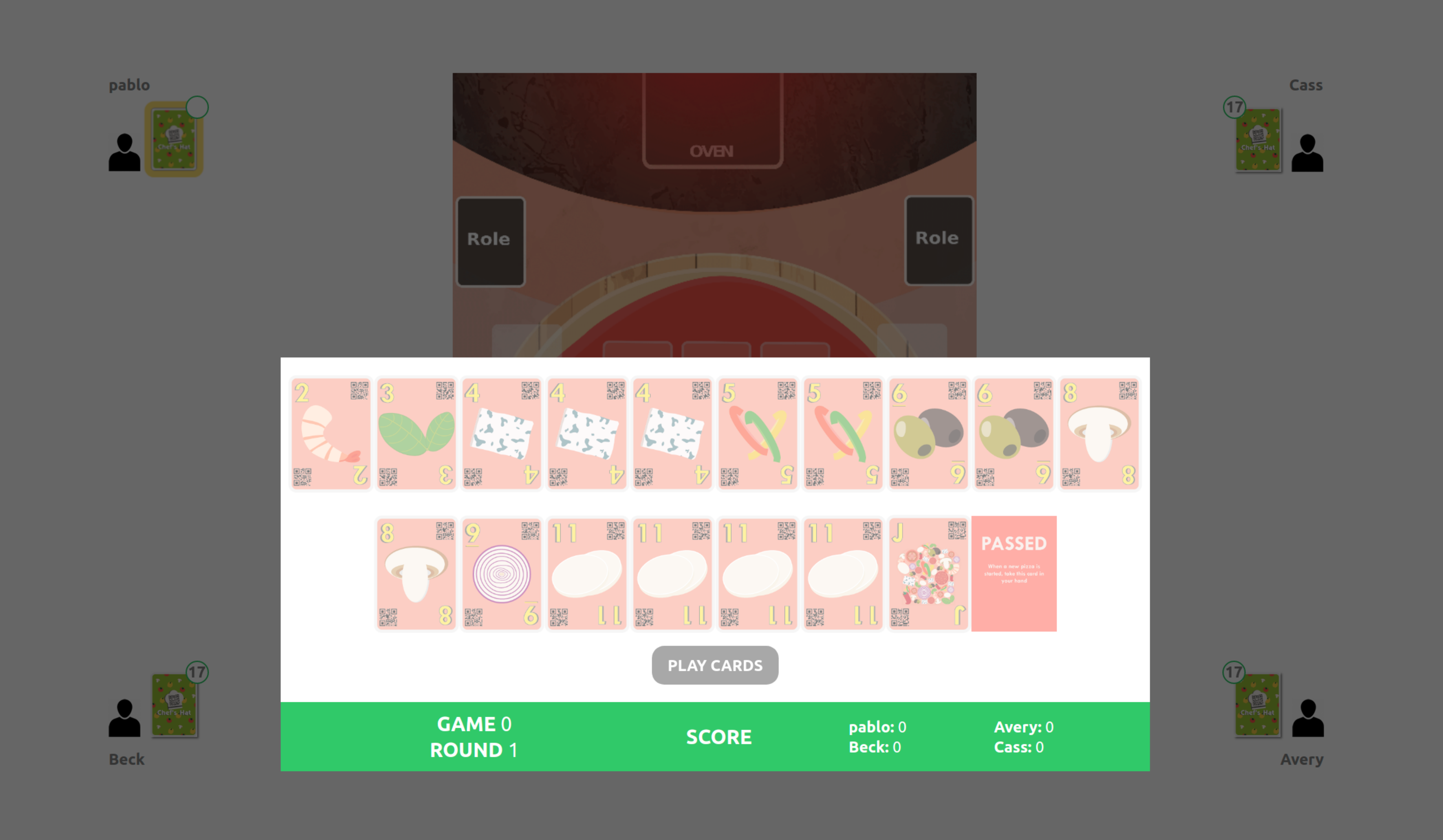 This Django-based platform allows putting humans to play against artificial agents. It implements all the mechanics and features of the simulation environment, which allows us to collect information on how humans play the game.

Most of the current Reinforcement-Learning solutions, although having real-world-inspired scenarios, focus on a direct space-action-reward mapping between the agent's actions and the environment’s state. That translates to agents that can adapt to dynamic scenarios, but, when applied to competitive and/or cooperative cases, fail to assess and deal with the impact of their opponents. In most cases, when these agents choose an action, they do not take into consideration how other agents can affect the state of the scenario. In competitive scenarios, the agents have to learn decisions that a) maximize their chances of winning the game, and b) minimize their adversaries' goals, while in cooperative scenarios b) is inverted. Besides dealing with complex scenarios, such solutions would have to deal with the dynamics between the agents themselves. In this regard, social reinforcement learning is still behind the mainstream applications and demonstrations of the last years.

We introduce here the Chef's Hat Cup, a competition that aims at the development of the most challenging artificial players!

The competition is separated into two tracks: a competitive and a cooperative scenario. In the first track, the participants will use the already available simulation environment to develop the most effective agents to play the Chef’s Hat card game and be the winner. In the second track, they will have to develop an agent that can increase the chances of a dummy agent winning the game.

The competition will run on the Chef's Hat GYM environment, and each team has as a goal to develop an agent that is able to play the game.

For each track of the competition, the winner will be chosen based on the track’s specific goal. For both tracks, each competitor will pass through the following process:

The competition will be run in a single tournament, with all the submitted agents present. A single agent can participate on both tracks but will be evaluated differently.

Can be found here: https://github.com/pablovin/ChefsHatGYM

The evaluation environment contains a set of specific and pre-defined installed libraries, that can be found here.

The tournament will run with these parameters:

Each agent will have access to 2GB of space, to be used as they please. This will be given by the "saveModelIn" property of each agent.

The simulation hardware is the following:

The prizes will be sponsored by the Contact Unit at the Italian Institute of Technology, and will be organized as follows:

Teams of up to five persons are invited to participate in the competition.

You can register by sending the following information:

to this email: This email address is being protected from spambots. You need JavaScript enabled to view it.

If you want to have more information about the project, or access to specific resources not listed here, please contact us through this e-mail address: This email address is being protected from spambots. You need JavaScript enabled to view it..

Pablo received his BSc in Information Systems from the Universidade Federal Rural de Pernambuco and his MSc in Computer Engineering from the Universidade de Pernambuco, both in Brazil. He received his Ph.D. in computer science from Universität Hamburg, Germany, and currently, he is a postdoctoral researcher at the Italian Institute of Technology in Genoa, Italy. His main research interests include deep learning and neurocognitive systems for emotional perception and representation, affect-based human-robot interaction, and its application on social robots. He has been a guest editor of the journals "IEEE Transactions on Affective Computing", "Frontiers on Neurorobotics" and "Elsevier Cognitive Systems Research". He took part in the proposition and organization committee, as publication chair, of the Joint IEEE International Conference on Development and Learning and on Epigenetic Robotics 2020.

Alessandra is the head of the COgNiTive Architecture for Collaborative Technologies (CONTACT) unit. In 2018 she has been awarded the ERC Starting Grant wHiSPER, focused on the investigation of joint perception between humans and robots. She published more than 60 papers and abstracts and participated in the coordination of the CODEFROR European IRSES project. She is an Associate Editor of Robots and Autonomous Systems, Cognitive Systems Research and the International Journal of Humanoid Robotics and she has served as a member of the Program Committee for the International Conference on Human-Agent Interaction and IEEE International Conference on Development and Learning and Epigenetic Robotics.  The scientific aim of her research is to investigate the sensory and motor mechanisms underlying mutual understanding in human-human and human-robot interaction.

The project is organized in the framework of the Starting Grant wHiSPER (G.A. No 804388) funded by the  European  Research  Council  (ERC)  under the  European Union’s  Horizon  2020  research and innovation programme.

The content of this website is the sole responsibility of the authors. The European Commission or its services cannot be held responsible for any use that may be made of the information it contains.